Ubisoft has today revealed that the PC version of Assassin’s Creed IV has gone gold and is ready to ship on November 22nd which ironically is the same day as the PS4 and Xbox One version release. PC gamers will no doubt take comfort in having the most polished version of the game, and will benefit from some unique features (Nvidia GPUs only). 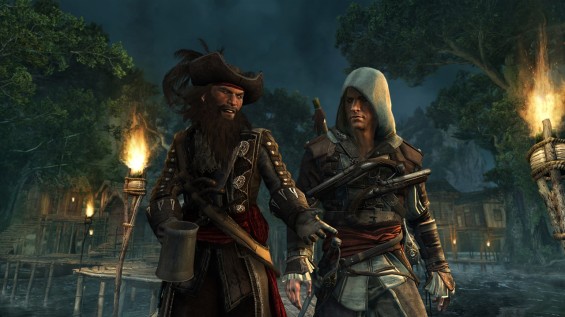 There will be 3 versions  of Assassin’s Creed IV Black Flag on PC including the following:

– The Standard Edition, available at retail and on digital formats.

– The Digital Deluxe Edition, a premium edition including the game, as well as bonus in-game content featuring new locations to discover and explore, additional customization items and a new adventure starring Aveline as the main character.

– The Uplay Digital Deluxe Edition, a digital package exclusively distributed on Uplay shop including all the contents from the Deluxe Edition, plus an additional in-game pack, Pride of the West Indies. This bonus content is exclusive to the Uplay Deluxe edition, available for pre-order .

Three Assassin’s Creed IV Black Flag Collector’s Editions will also be available in the UK for Windows PC versions of the game.

This premium edition offers a selection of essential physical and digital items for real adventurers:

– 2 Lithographs in their protective envelope

This edition includes physical and digital content for the Assassin’s Creed enthusiast:

– 2 Lithographs in their protective envelope

This special edition will be available at the same price as the standard edition, but also includes unlockable in-game content only available at game launch.

A Season Pass is also available for PC, which allows players to purchase several packages of downloadable content, to be released between now and March 2014, at a 20 percent discount off the total regular unit price. Assassin’s Creed IV Black Flag Season Pass can be pre-ordered here.

Players who pre-order Assassin’s Creed IV Black Flag Uplay Digital Deluxe Edition from the Uplay Shop will be granted an additional 25% discount off the Season Pass.

Details about the Ubisoft Nvidia Partnership:

Ubisoft and NVIDIA have worked closely together to create a fully optimized version of the game that runs on GeForce GTX graphics cards. The result is that gamers with an NVIDIA GeForce GTX graphics card will get an Assassin’s Creed IV Black Flag experience that features a wealth of NVIDIA’s advanced gaming technologies such as TXAA and more. The extra performance means more immersive gaming including life-like environments, realistic combat and spectacular, cinematic visuals.

“NVIDIA engineers work with their Ubisoft counterparts across the globe to ensure that PC games are the best they can be – and ‘Assassin’s Creed IV: Black Flag’ is a great example of that,” said Tony Tamasi, senior vice president of Content and Technology at NVIDIA. “We’ve integrated advanced, PC-specific technologies into the game to give mood and depth to scenes and bring buildings and landscapes to life. The end result is an unparalleled visual treat, and set to be an absolute PC blockbuster.”

Assassin’s Creed IV Black Flag will feature several NVIDIA Technologies: God Rays – which allowed Ubisoft Montreal to paint beams of light that illuminate a scene from above, horizon-based ambient occlusion + (HBAO+) for more detailed and realistic shadows around objects that obstruct rays of light, percentage-closer soft shadows (PCSS) for more lifelike contact hardening shadows, and temporal anti-aliasing (TXAA) for smoother edges. With the addition of enhanced 4K textures, there’s never been a better time to take to the high seas.

For a limited time, buyers of the NVIDIA GeForce GTX TITAN, 780 Ti, 780, 770, 760, 660, 670, 680, and 690 from participating retailers and e-tailers will receive a complimentary copy of Assassin’s Creed IV: Black Flag in addition to Ubisoft’s other blockbuster title, Splinter Cell Blacklist. Details can be found at www.GeForce.com/Pirates