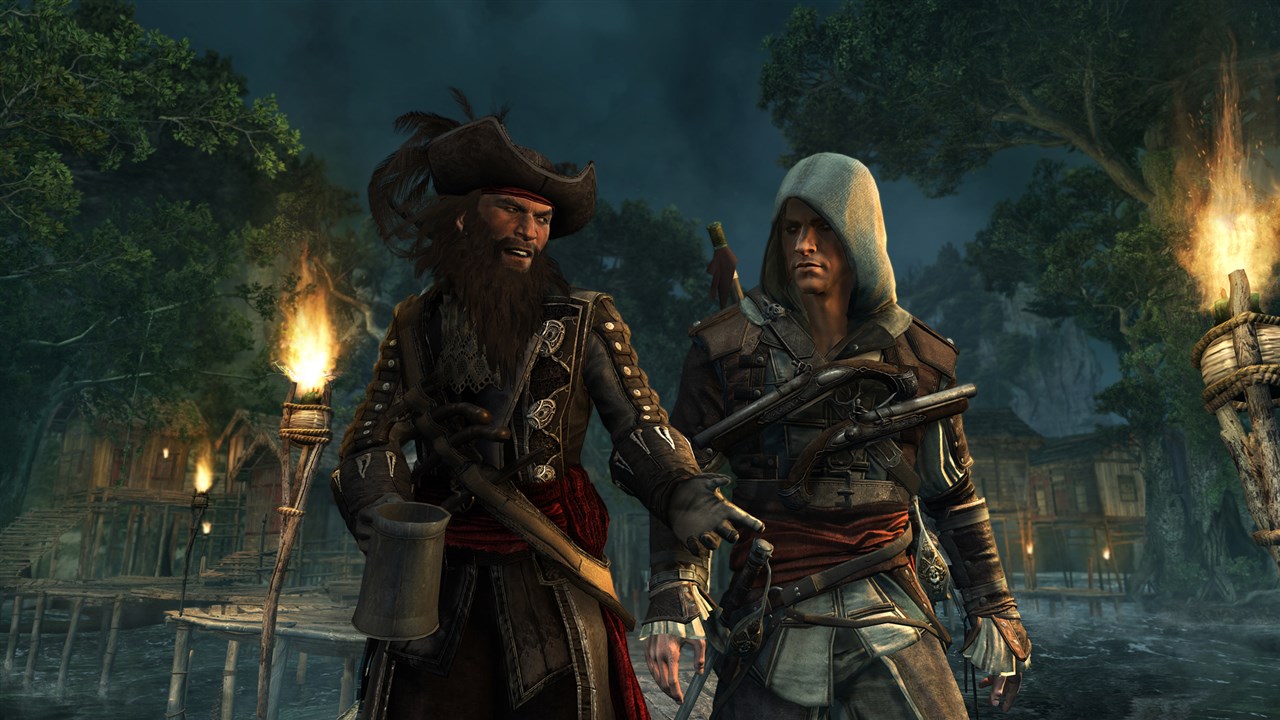 Ubisoft’s massive and now yearly series takes a step back from its predecessor, by ditching the good ol USA and taking to the sunny climes of the Caribbean. With a new hero and a reworking of familiar mechanics, how well does game number 6 stack up, and more importantly is it worthy of your time. Take a look at our Assassin’s Creed 4 video review for the full picture.

Today we’re taking a look at Ubisoft’s massive franchise and latest game in the now yearly series, Assassin’s Creed 4 which is available now on current, next gen and PC platforms. Set as a prequel to the last game, the idea seems to point to a more refined game that utilizes familiar experiences from its predecessors.

To begin, players assume the role of man of action Edward Kenway, a sort of lovable rogue supposedly, but someone who doesn’t care for the consequences of killing if it means filling his pockets with loot. There’s an interesting but highly vague back story for Edward, and from the offset the game makes it quite clear that all he is interested in is making enough coin so that when he returns home he and the missus can lead a better life. Admirable motives for sure, but kind of contradictory to the fact that Edward doesn’t care how, and maims and kills without much thought. The story remains fairly tame with lots of typical scenarios players will be familiar with, but what is neat is how the Assassin’s versus Templars story arc worms its way in gradually, where at its conclusion the game treads on familiar ground. However, getting there is the key and with some larger than life supporting characters like the infamous Blackbeard, offers an entertaining ride through the sunny or stormy West Indian waters.

Story aside, the gameplay remains as tight as it always has been, except there’s more focus on the naval aspects for exploration this time. Rather than drown players in a load of narrative nonsense at the start, the game pretty much lets players get stuck in on the action right off the bat, a lesson learned from the last game perhaps. Players are free to sail the seas, explore islands, hunt for animals, take on jobs and generally meander in and out of the story at leisure. There’s lots to do and a fairly large play area to mess around in which provides a refreshing backdrop to the previous games.

As before, the game offers a mixture of stealth or action based gameplay and in regards to the stealth is a much more focused effort this time. Players can hop in and out of dense foliage, take to the rooftops or trees, and generally sneak past or engage enemies. There’s even a pacifist set of options, although these don’t fully come to fruition until later in the game and there’s no real distinction for not killing which is a shame. The stealth works well using familiar gameplay features and just feels a lot more polished and rewarding this time.

When things don’t go to plan, the combat becomes the mainstay of encounters, whether that be on land or at sea with the odd escape scene being tossed in on occasion. The classic counter based combo attack sequences remain, and although almost QTE like in its approach does feel pretty satisfying as swords, daggers and guns can be used on the fly. Enemy AI seems to be unchanged, although in some instances there’s more attacking variety required when tackling specific enemy types to keep players from simply spamming a singular attack button.

Assassin’s Creed 4 takes the naval aspects to new heights here and integrates the ship based gameplay as a standard feature for navigation of the many islands. It’s very relaxing to simply ride the waves with the sun or stars beaming down on the ship and its hearty crew and replaces the horse riding of the previous games. There’s still an abundance of fast travel features, but with much of the story also relying on the naval gameplay, means there’s reason to head out into the waters and take down enemy ships to help upgrade Edward’s ship the Jackdaw. The ship is very easy to control, and offers an arcade like approach when it comes to encounters with the enemy. Players simply have to line up and fire the cannons to disable the European forces that have made the Caribbean their home.  Players can then decide whether to sink or board their victims with the latter offering more loot but taking a bit more time. After so many hours, it does become a little  repetitive, but the drive to upgrade the ship remains a worthy goal all the same and it’s very satisfying taking down a number of ships all at once.

What really works well is the level of freedom players are granted, with a vast number of side activities being available at all times which relate to various upgrade features as a consistent motive for players. Perhaps the only real spanner in the works aside from touches of repetitive gameplay elements such as taking on forts for example always play out the same, is the inclusion of eavesdropping and tailing missions which litter the story and are simply not much fun.

Graphically, Assassin’s Creed 4 looks fantastic for an open world game, with the Caribbean offering a welcome backdrop to all the pirating madness and is frankly a work of art. There’s some incredible scenes of day and night, sunny and stormy weather, which makes the world feel more alive. The impressive water effects convey the unpredictable nature of the open seas with a compelling sense of realism which makes the naval gameplay much more than simply going from A to B.  Sadly, the NPCs still act like drones with their looped sequences on land, but overall the settlements do feel lived in with their more compact sizes compared to places such as New York in the last game. What has to be said is that the game does look mighty fine on whatever platform you’re playing, although the next gen and the PC versions come out on top with a host of additional subtle features such as moving leaves, better lighting, smoke and weather effects and generally much more detail in the textures.  There’s less stress for systems this time which means the game runs pretty smoothly and doesn’t suffer severe frame rate drops in the larger settlements.

Audio is naturally of a high standard with some solid performances from all concerned. Edward is likable with his English twang, and there’s enough diversity in tone  from the supporting cast that makes the game sound as rowdy as it looks. Dressed in an excellent musical score and some fine singing from the Jackdaw’s  crew which can be toggled on or off, the game’s aural pallet is vast with sound effects that work well in tandem with the game’s glorious visuals.

In terms of longevity, there’s simply many hours of Edward’s story to work through, and even the sections set in the real world are less taxing and more fun. There’s an abundances of collectibles, puzzles, mini-games, upgrades and side activities to embark on, where finishing the story only nets around half of the game’s completion. In this regard, solo players will find much to do and will get their monies worth for sure if they gun for 100 percent and all the associated achievements and challenges.

As always, the multiplayer makes a return offering objective based stealth gameplay, and many tweaks to the basic template to mess around with. Players can also embark on co-op missions, and set their own parameters with a handy customization tool.  Sadly, for solo players there’s no proper options here, to extend the single player experience, and whilst it’s possible to play the co-op missions solo, they simply aren’t designed for lone players.

To conclude, Assassin’s Creed 4 takes a lot of liberties with its historical representation and even the name somewhat feels removed from the pirate theme the game presents.  There’s a  turn around with  the underlying modern day story, and the game offers a contradictory main character in Edward that’s perhaps  a little too one dimensional. It’s a shame none of the ship’s crew have any personality and could have made for a more engaging cast of characters you spend much time listening to and playing with.  In many ways, the story is the weakest aspect of the game, despite offering many cool scenarios to get in and out of marred only by repetitive tailing missions and some trial and error moments.  The gameplay is were the package shines though, with such a vast number of refined  elements to mess around with that ties everything together makes the whole experience a joy to behold.  Whether you’re at sea sinking ships, to infiltrating enemy positions at night, it’s clear Ubisoft have pooled ideas from their other games and worked them into this one as a definitive core piece of entertainment. In this regard, Assassin’s Creed 4 comes highly recommended, although there’s much less of an assassin game here and more a marvelous fantastical idea of what life as a pirate was like. This is the best pirate game to date, although aside from adding deeper elements such as a more strategic trading system, it’s hard to picture the setting being used for the future of the franchise. Players should enjoy it for what it is, which is a mighty fine piece of art that is drenched in beauty and bountiful treasures regardless of which platform you choose;  although the PC version does come out on top being undoubtedly the best looking of the bunch if you care for graphics.