4A Games released its much anticipated shooter Arktika.1 exclusively for the Oculus Rift and now that we’ve completed the game can safely say it’s a bit of an oddball. At its heart there’s a shooting gallery type game here but tagging it with such a simplistic sounding premise wouldn’t be doing it justice. With a mixture of intense shooting sections, puzzles and plenty of world interactions Arktika.1 makes clever use of the VR medium. However, some technical issues and unusual gameplay choices might separate the potential audience. So in light of this, is Arktika.1 worth a punt considering its full asking price?

There is a lot to love about Arktika.1’s direction. After a short intro drive to base, you start off your VR adventure in a home tower where the sexy android assistant Viktoria lays it on. You can have a little play around in your room, throw a few bottles at Viktoria, then head to the armory. Here you can engage in some shooting practice, purchase new guns, upgrade weapons and even enter a VR inside VR mode for additional challenges. Once done, you head out into the wastes to tackle the next section of the story, or repeat cleared areas for a greater score or complete additional challenges. The story is reasonably gripping but you will be far too distracted with the mish-mash of actions when out in the field. One moment you are ducking for cover as enemies charge at you from all sides, performing headshots and generally being a badass dual wielding gun for hire. The next, you’re all technical operating bits of machinery or searching for items to help progress forwards. The puzzle elements break up simply shooting through the entire duration but sadly are just not that interesting. One puzzle in particular during the closing moments is criminally inserted to annoy rather than serve much purpose other than to elongate the experience. In a nutshell, the shooting bits are solid (despite some not so accurate aim) and the puzzles an acquired taste. Those with twitchy fingers are likely to be annoyed at some puzzles despite the obvious way the interactive elements help solve them. On the other hand, players who want a little extra than just a continuous stream of enemies to kill can come away quite impressed with the way you have to grab, move, touch, push and pull with the touch controllers. It’s a very involving experience indeed, although there are some issues with boundaries whereby certain switches or levers seem out of reach (depending on your play area size). Whilst the experience is better suited to standing, playing seated is very possible, save getting a crick neck on occasion. 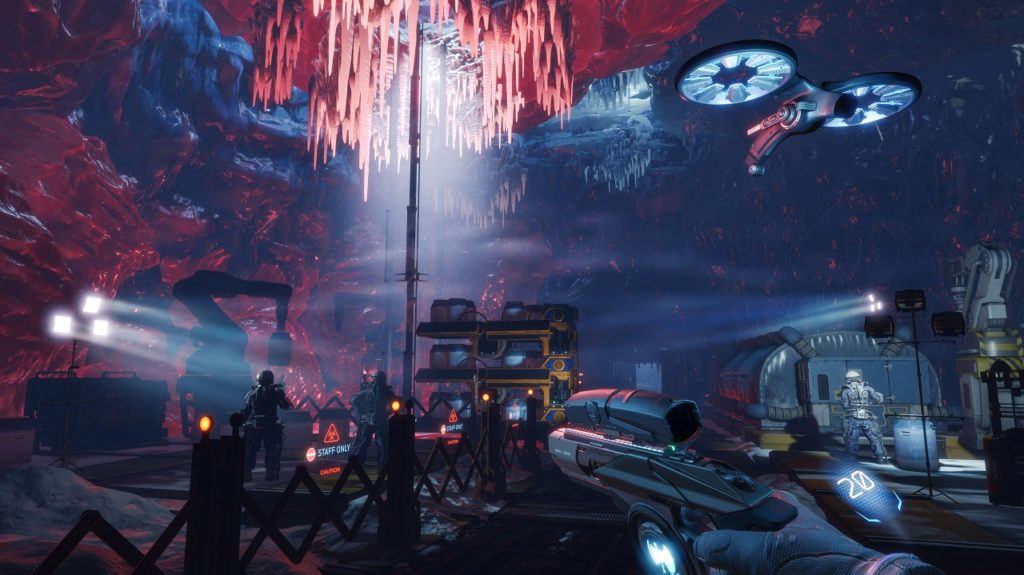 A massive caveat is given with regards to the way movement is handled. The story speaks of teleportation as an ability, but the reality is it replaces free walking movement or free teleportation. Instead players are offered nodal teleporting at select points in each area. A blue outline (and accompanying sound effect) highlights where you can jump to in the blink of an eye. It’s not the best approach for those wanting to look at every nook and cranny, but it does work very well once you get used to it. In the heat of combat especially, using the nodal points is a valid tactic for getting the drop on enemies hiding behind cover. After an hour’s play (or less even) you’ll either learn to live with it, or bask in its ability to make you feel a bit superhuman. It has to be said though the combat is pretty sweet and a redeeming feature even if you’re not a fan of nodal jumping around. There’s a satisfying kick to the weapons and being able to dual wield and shoot up foes who are running is excellent as is getting those all important headshots. It can’t be stressed enough how engaging the entire game is from start to conclusion even if some elements are going to be quite divisive amongst those just looking for a straight up shooter.

In terms of visual quality, there is a clever use of darkness, interior locations and fogging to avoid rendering distant objects, which means most of the action is up close making for better detail in VR. There’s obviously a bit of a budget here in terms of modelling the environments but there is a lack of variety when it comes to the opposition. That said, massive props have to be given for being able to shoot up humans for a change – although some robots and demonic creatures make an appearance from time to time. There are some neat touches though such as seeing your cold breath which is activated by the Rift built in microphone, or blowing into a harmonica to make it work. Arktika.1 is a moody game and offers distinctive locales to wander but you will visit some places more than once. It’s hard to say how well the game performs as each system is different, but using a GTX 1080 Ti had no major issues using the maximum “Extreme” graphics setting. That’s not to say there were none, as one section later on in the story started to tank the fps for no apparent reason, but that could have just been our system playing up. It has to be noted there are some scaling issues which means the characters look a little on the large size and sometimes you might appear too tall, or too small. Hopefully this will be fixed in an update sooner rather than later. 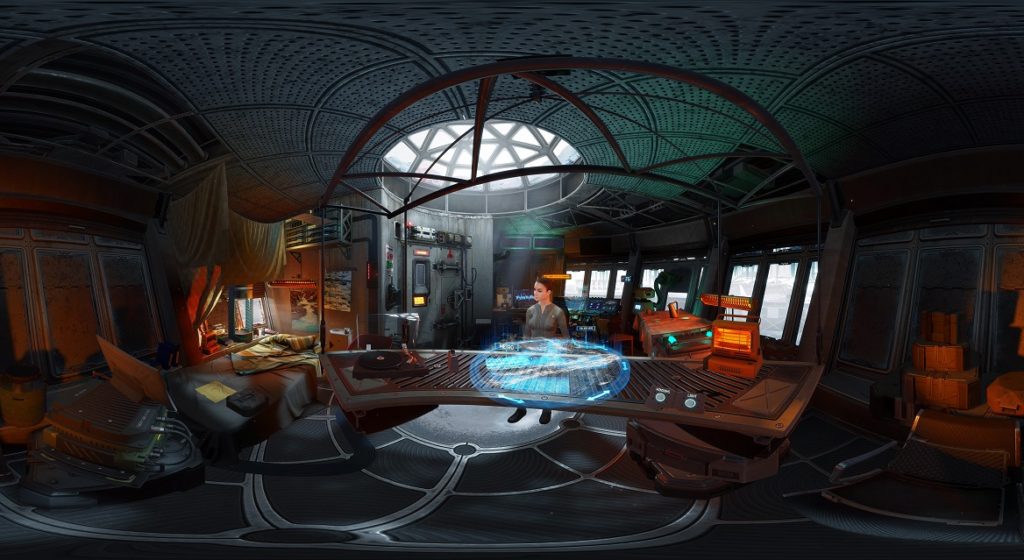 Audio is pretty good as well with decent sound effects and enemies that call you names or swear at you giving much more reason to send them to hell. Whilst the enemy quips are repeated often, for some reason being called a mother f***er or piece of s*** never gets old. Viktoria is also well voiced and with her slender looks and staring gaze makes for some pleasant eye candy between missions. Sadly you can’t spend some R&R time with her between rounds!

The all important longevity is perhaps a mixed bag because you will beat the story in an afternoon as most missions last around 30 minutes or less. The question is, can you play for hours on end in one sitting? Once the story is bested, then you have the choice to up the difficulty or add challenges to each mission and try and beat your previous score. It’s worth it at least once especially if you’re playing on medium difficulty or less because the challenge increases greatly when the enemy becomes more deadly. You can really build up a sweat ducking in and out of cover. 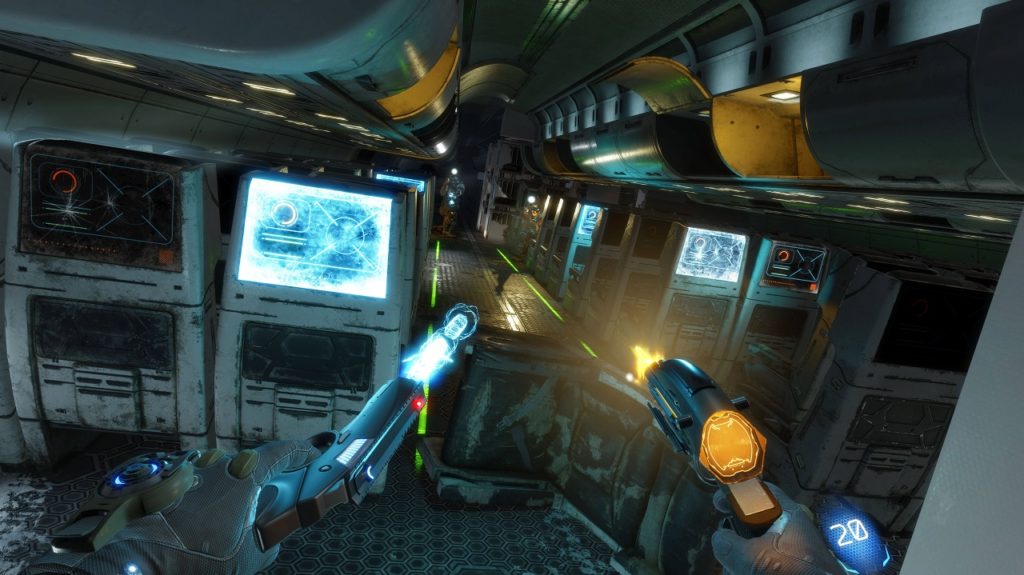 So, is Arktika.1 worth a purchase? Well, for a polished VR game that has a AAA feel to it 4A delivers a compelling experience even if it’s not going to last into double figures play time on a first play through. There’s some solid shooting action, interesting locales and the interaction with the world is pretty good – including shooting the heads off mannequins . The puzzles can be intrusive, and somewhat cryptic at times but depending on your attention span will either come as welcome breaks from the action or frustrating elements that have no place in a shooter. Take your pick! If you’re after a game that feels like the promise of VR gaming has hinted at for a long time then Arktika.1 actually delivers a sound VR experience all said and done. If the idea of nodal teleporting is something you’ll never come to terms with then sadly, you’ll be missing out. Puzzles and oddities aside this is worth checking out as it’s a satisfying shooter that stands out amongst a sea of many similar VR offerings.