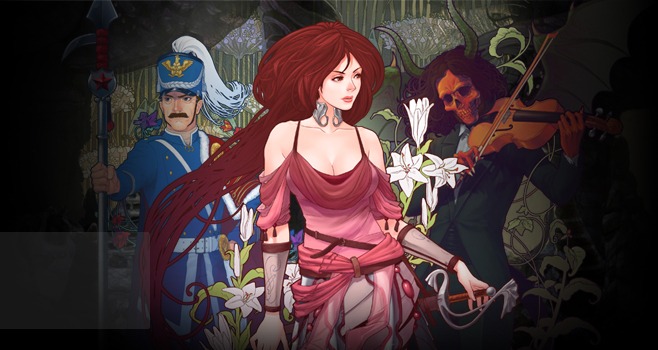 Releasing yesterday on Xbox 360, PC and PS4 from Atlas and developed by Chilean developers ACE Team comes the side scrolling action adventure game Abyss Odyssey which offers a roguelike experience for the dedicated gamer. With some great visuals and a variety of foes, the game ticks all the right boxes, but is it worth the price of entry? Gamers can snag the game for under £10.99 or $14.99 with a slight discount for those of you who are PS Plus members. Sadly, Steam were running a discount on the PC version but this has since expired, so it’s back to the full price, but the question remains, is the game worth playing? Take a look at our two 3o minute gameplay videos to get an idea of what to expect, and a look at the end boss.

Looking at the basics, players enter the procedural generated dungeons known as the abyss, and fight their way from top to bottom to reach the warlock boss. En route, players can choose their path, but what makes things more interesting is the fact that every time players enter the fray the difficulty of each area is random and ranges from easy, moderate to hard. Careful planning can result in an easier path being offered (if the game allows), but then again, sometimes every level could be set to hard difficulty. This random aspect is all part of the charm and certainly puts players to the test. From the start, only one character is available, but as more time is spent delving deeper into the murky depths, more playable characters can be unlocked or captured and used during the run.  What’s neat about this is the fact there are quite a few characters to play as, each with their own fighting style, making for a varied but simple experience. The game isn’t that hard to pick up and play with its easy to perform directional attacks, double jumps and special moves, however mastery of dodging, blocking and countering takes a little more skill and practice lest you get beaten to a pulp early on. There are  environmental traps to avoid and various enemies to take down, which require combos and a bit of learning making the gameplay a bit deeper than simply mashing attack buttons.

The videos are pretty self explanatory, and highlight the basics of the game and what needs to be done, but on top of a single player experience, the game does offer co-op play and local versus as well which is simply the icing on the cake. So, and in keeping with the title here, the Summer months are usually devoid of games to play and right now, there’s little fanfare with new releases (aside from the Destiny Beta which starts today).  Abyss Odyssey has therefore released at a good time and certainly fills some of the void. For its price though and what it has to offer, the game comes highly recommended, more so for console gamers as PC audiences are spoilt for choice with the number of weekly releases.  If the videos haven’t sold you, and more information is required, then head on over to the official website and check out some more details before jumping in. If you do decide to take the plunge, then welcome to the club and perhaps we’ll see you in the abyss some time.

Abyss Odyssey is a charming, colourful game, filled with action and exploration that rewards players who stick it out and continually keep playing to get better, and build resources. The roguelike elements aren’t as unforgiving as some other games and it’s this fact that makes the it a more welcoming proposition for those who’d rather not be punished heavily after hours of time investment. In this regard, the game can be enjoyed  by anyone willing to sample its delights and having already said so in the headline, this is a must play.

In closing, if you’ve already purchased the game or would like to know more about the game’s mechanics, then this handy guide is a valuable resource and worth checking out.