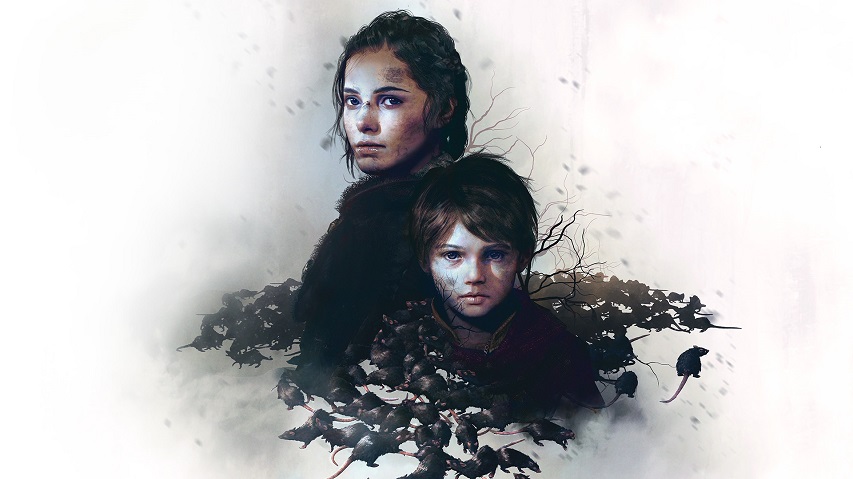 Today we take a look at Asobo Studios’ dramatic stealth game A Plague Tale Innocence which released on consoles and PC. Set within the 1300s players take on the role of young girl, Amicia De Rune. She lives in France during the 100 years war and the devastating Black Death or The Plague. With her young sibling Hugo, the pair escape the dangers but uncover a sinister truth about their noble bloodline. Without going too much into spoilers, this is a story based third-person adventure game with plentiful stealth elements and a touch of action thrown in.

The game sets the tone very well, giving players a glimpse of Amicia’s life as a noblewoman in the making. However, what starts out rather rosy soon turns to despair and desperation. The game introduces the basics of stealth gameplay where players distract guards, sneak behind cover and use various tools to navigate each level. As players advance through the story Amicia, gains new skills and abilities where by the end of the game some magical elements come into play.

Interestingly, whilst stealth is the best option, players can and do get the chance to hit back with Amicia’s slingshot. Coupled with various potions and items given to her from friendlies means she becomes quite adept at taking out grown men and fully armored guards. In fact, the game does a grand job of building on these gameplay elements where new characters add their own set of skills into the mix. It all works rather peachy. Another facet players learn early on is how light and dark play an impact in navigating the levels. Traditionally, stealth tends to encourage players to sneak in the shadows. Cleverly, once the infested rats become a problem, players use light to progress. It’s a neat fusion of contrasts that feels quite natural thanks to the excellent level design.

Some lateral puzzles feature but aren’t too taxing, at least there isn’t too much pressure during these moments. However, at one point the game glitched when moving masses of rats which made the game cease to move on. This happened twice in the same area which hopefully is something fixable.

Perhaps the only gripe leveled at the gameplay comes when players need to use a rather fiddly menu system to swap between skills. On occasion a bit of speed is required and during the heat of the moment can leave players overwhelmed in real-time. As an example, players might need to shoot out a patrolling guard’s light, switch to menu select a skill then aim a pointer and so on and it all becomes a bit too fiddly resulting in death. In fact, some elements where there is too much input from the player towards the end of the game just don’t work well. A bit more refinement might make this more intuitive (trying to avoid spoilers here).

A Plague Tale’s biggest asset aside from some wonderful audio is the visual representation of 14th century France. The game oozes dark and foreboding atmosphere amongst some glorious eye candy making this a visual tour de force from the get go. The character models are fantastic, with good attention to detail – although Amicia’s facial expressions could be more expressive at times during conversations. That said, Asobo created a realistic looking world to explore with varied locations , times of day and seasons. Using the game’s max settings and at 4K offers the best visuals which simply look awesome. The masses of rats also look great but is perhaps the weakest feature amongst the impressive lighting, shadow and particle effects.

As mentioned, the audio is top quality with solid acting from all of the cast. However, it is the banter during play that really sweetens the deal. Hugo and Amicia’s exchanges especially are endearing, sweet and humorous all at the same time. The game provides distinct personalities for each character which compliments the story-telling. When you couple an often moody or thought provoking score and you have a game that goes to town on the senses both visually and aurally.

In terms of length, players can expect around 12 hours or more to play through the 17 chapters on offer. It’s not all following a straight path a la walking sim and allows for a little exploration for secret collectibles. Players can replay levels at any time although the reality is the game doesn’t change from a first time play through. It’s those who strive for 100% completion who will get the most mileage here.

A Plague Tale Innocence is a neat game with a great theme and a unconventional approach to stealth gameplay. It all works well together aside from the aforementioned fiddly bits which don’t feel right at times. That said, if you can battle through the less favourable moments you will find a captivating experience that handles stealth and story-telling very well. Hats off then to Asobo for making a chilling, gritty but engaging game with wonderful audio visuals that should keep players well-hooked.