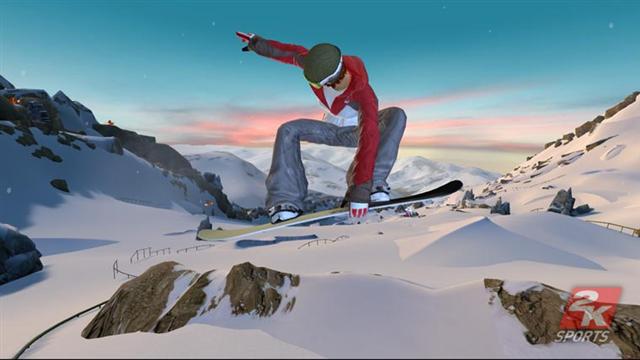 The launch of the Xbox 360 saw a number of sports titles being offered to cater for a wide number of sporting tastes and this included catering for people who like extreme sports, namely snowboarding. 2K Games presents Amped 3 to accompany its other published sports title NBA 2K6. The original Amped on Xbox was also released early on in the systems life and so it seems that history has perhaps repeated itself. Lets not forget that in between we have had Amped 2 but from what I can gather Amped 3 really does put the fun back into sports games and is perhaps the best in the series so far?

Amped 3 is unlike other sports games because players follow a specific wacky storyline but also have the option of participating in events and media challenges at any time. Basically you are free to roam the mountains in the game which to begin with usually require some unlocking to fully open up these areas and offer you the full number of challenges (there are over 200). Following the story you will be introduced to your crew of wacky but loveable friends; it is here that you will need to enter and perform well in a number of story related events that ultimately open up new mountains and continue the deranged story. To begin players create there own character either male or female and can change things like face type, skin tone and body size. Clothing and gear can also be purchased (you unlock more items by completing events) and changed at any time during the game.

Controlling your character is pretty straight forward as the left stick controls movement on the ground and in the air and the face buttons control things like jumping and what grab/rail/air moves you perform. Pulling the left and right triggers allows your character to tuck and build up speed. Alternatively pressing up on the d-pad allows you to enter snowball mode and throw snowballs at fellow boarders or bystanders. In fact bystanders are able to throw snow in your face whilst you a pulling off tricks which sometimes will cause you to bail (it’s not easy to see where you are going with a face full of snow). Either way this seems to happen more often when performing badly!

The events themselves are a mixture of navigating the mountain through various checkpoints or rings to beating fellow snowboarders by following their lead and out tricking them (scoring more points). A favourite event is where you have to hurl your character off the side of the mountain (usually on some kind of sled) and inflict as much damage to your character as possible. This means steering into rocks and trying to keep momentum going for those last few points. Whilst very simple in its premise it’s actually very fun and becomes a nice distraction from the seriousness of pulling off loads of fancy tricks.

Across all of the mountains there are several on the fly media events to participate in. What these translate to is at certain points on the map you are required to perform a required move for the cameras. Each event requires either flip skills, spin skills, rail skills and grab skills and your job is to beat a minimum score to pass. These are pretty easy and with a few attempts you will be able to judge what moves work best for a particular jump you are facing. On a side note these media challenges can get in the way if you are attempting a high scoring run down the mountain and happen to hit one of these ramps which reset your score. Luckily you can turn them off in the options if you so choose.

I think what really works about Amped 3’s game play is the sheer amount of freedom to do as you please and the fact that the player always has something to work towards whether that be getting gold on an event to beating your highest score doing a freestyle run down the mountain. It’s great being able to find a decent route which enables you to pull off some excellent looking tricks and then linking them in a combo. I found that performing linked moves felt very similar to the Tony Hawk’s games and is quite easy to do but hard to master especially as the pressure rises when you manage to get a high multiplier for your score where one error means that you lose it all!

The graphics in Amped 3 are actually very pretty indeed and capture the essence of a mountainside ski resort perfectly with spectators standing around or other boarders doing runs of their own. From the peak of a mountain you are able to stop and take a look at what lies before you. What is also pretty spectacular is the game’s draw distance which in layman’s terms means you can see miles into the distance without being hindered by dreaded view obscuring fog. This offers some remarkable vistas/views and creates a real sense of scale especially when you begin your decent down the mountain which can take some time from peak to base (although you can start your rider off at a number of key points scattered over the mountains at any time).

The character models are quite cool and it’s certainly pleasant to see your character in the cut-scenes wearing the clothes you have chosen. The overall presentation for the story is actually totally out there and is a mixture of 8-bit old school graphics, toy models and puppets. The story scenes are actually highly amusing snippets of fun and really point to a game that doesn’t take itself too seriously. This works well and for a sports title that could have simply opted for stat based play; injects some life into proceedings by having a very crazy but fun exterior.

One thing that has to be noted is the fact that the sense of speed doesn’t feel as fast as it should and there really is no difference in top speed when racing down steep or less steep slopes. That said, this is not SSX and as far as I could tell there were no races per se as the game’s focus is more on having fun performing tricks. In this respect the issue of speed isn’t so noticeable.

The sound is full on and in combination with the totally mad cut-scenes will have your ears fully under attack from all directions. The voice acting is pretty average but each of the characters personalities are performed in a distinct manner. The game’s music is also a full on experience with masses of tunes available from a wide number of genres such as Punk, Hip-Hop, Alternative and Rock. As you are probably aware the Xbox 360 allows for custom tracks to be used with games and with Amped 3 this is possible if you tire of screaming punk or overly cool Hip-Hop. The boarding sound effects are as you would expect with different sounds being produced depending on the surface you are riding on.

This is a tough one because although there are plenty of challenges to get gold on or to beat your high score there is no Xbox Live multiplayer. The Live element of the game is focused around scoring gold and then checking your score in comparison to the rest of the world’s players. This is a fun addition to the game but it’s not the same as competing against other players directly. Completing all challenges will take quite a while to do and obviously scoring gold’s on all of them a lot longer. As I mentioned earlier you have the option of simply doing a run to best your own highest scores which is actually pretty fun too and to make things more interesting you are able to add your own ramps and rails to courses in a build mode. Overall Amped 3 will last as long as you get bored and with the option to play the story as a male or female means that there’s plenty to do here.

I’ve enjoyed playing Amped 3 on the Xbox 360 because it’s quite a contrast to the other games that are on offer especially the first person antics of Condemned, Quake 4, Cod2 and Perfect Dark Zero. I recommend this title to anyone looking for something different to play on their new console and whilst the game might not look as visually impressive as Kameo it has enough personality of its own to be a worthwhile choice. The lack of genuine Live play does hurt the longevity of the game but I guess you cant have everything. Amped 3 is a solid title although game play wise doesn’t digress too far from its predecessors. I cant say if Amped 3 is the best in the series as each one has its own flavour but what I can say is that Amped 3 is probably the most fun of the trio.