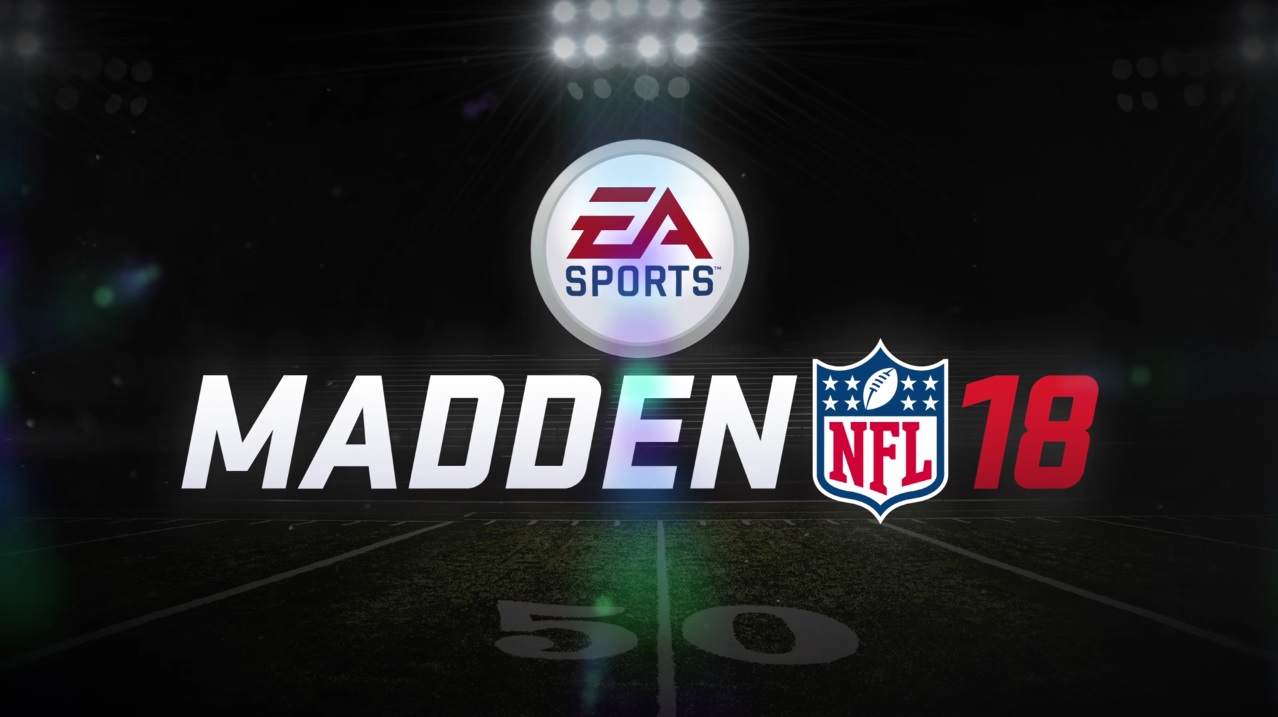 The annual release of Madden has been always been highly anticipated among NFL fans and gamers alike. One of the longest running franchises of any sports title needs little introduction and the yearly reviews seem to be nothing more than copy & paste with some minor edits. How much can really change in a year? Some tweaks to gameplay and some added game modes are all EA can seemingly do, but this year promises to be packed full of content to deliver the total package. Granted we’ve heard this same thing year after year and many times our hopes have been dashed with shoddy in-game experience or the feeling that EA just slapped a fresh coat of paint on the updated rosters. Excuse me for being pesamistic, but the promises of publishers fizzled out a long time ago and even though I’m one of the yearly Madden purchasers it doesn’t mean I won’t pull punches when I feel ripped off.

After loading up the game the first dramatic change you notice is the transition to the Frostbite 3 engine which has primarily been used in action games like Battlefield and Mass Effect in the past. The switch pushes towards a more realistic feel for Madden this year in every possible aspect of the game. Colors are more vibrant, player movements more fluid, fan filled stadiums feel authentic, and even the gameday intro that gives you a near perfect preview of outside of the stadium and team entrances are bursting with that NFL feel. Granted, after seeing a few pregame intros you’ll want to skip straight to the gameplay, but this doesn’t diminish the fact that EA put some polish into making this feel like the real deal. The only thing that would keep gamers from skipping these cut scenes is when Madden goes full VR and you get the feel of walking into the stadium (Hey a fan can dream right?!?). With all the visual prowess of the Frostbite engine the gameplay should flow smoothly with each snap of the pigskin and for the vast majority of the time they do. You will notice during the flow of the game graphical glitches like clipping and odd contortions of the players bodies that make them look like they are floating above the field or able to bend their bodies like Gumby. That said, the game looks stunning, but it’s the little details they missed that make it feel a little less realistic than it could have been. 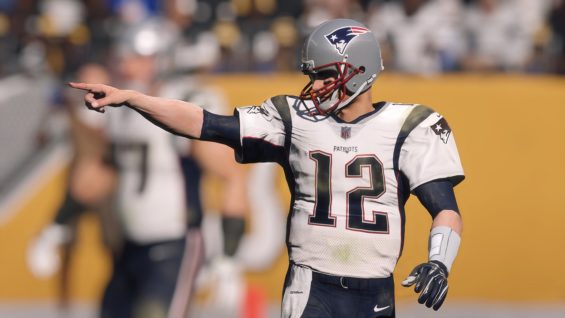 Core mechanics haven’t changed much from last year, but they do feel more streamlined to adjust to the speed of the game and positioning of your players on the field. In years past it was nothing for the quarterback to scramble outside of the pocket and throw across his body to the receiver on the opposite side of the field for big plays. That is almost as impossible as respawning in real life after you’ve been shot in the head. Thankfully the team for Madden 18 put realism into a game and ditched some of the arcadey sports feel the game use to have. QBs pressured in the pocket will struggle to make deep throws, receivers can be knocked off their routes at the line by defenders, and the running with the ball doesn’t give you unlimited instant directional changes. There is the new mechanic of target passing that allows you to place the ball with precision on the field and while this adds another element to the controls it just feels like too much of a gimmick with no real payoff when you can get the same results using the “A” button to lob a pass or sling a bullet.

Madden 18 offers so many game modes you’ll never go bored if you’re in the mood to do battle on the gridiron. The classic franchise mode offers an in depth experience that allows you to control every aspect of your team or you can run it as simple as you’d like and just play your season games. With the 4 different difficulties anyone can jump in and have some fun, but if you think the All-Madden difficulty was a breeze last year you’ll be pleasantly frustrated with this attempt. There is a “Play Now Live” option that gives you scenarios that have played out during the season so far with snippets of live commentary from the games. While this isn’t revolutionary it sure helps to keep content fresh. MUT, or Madden Ultimate Team, has been the crown jewel and money making machine of the franchise since its introduction. This year is no different and will siphon money out of you before you even realize it. One of the biggest changes are fantasy packs that allow you to choose your cards instead of just getting what you’re dealt. Be prepared to grind through insane amounts of solo challenges in order to compete if you don’t want to spend the cash. It’s tedious, but oh so fun as you stack your fantasy team to reach that elusive 99 overall rating. 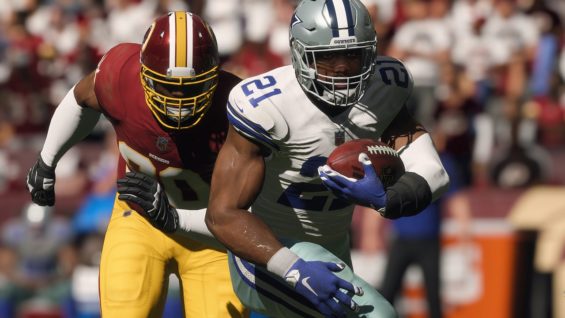 EA showcased the new “Longshot” story mode as a way to spin a narrative around a football player’s quest to make it to the NFL. If you love sports movies where the underdog comes out on top despite almost insurmountable odds and life tragedies, then you’ll feel right at home as you guide quarterback Devin Wade through a multitude of challenges on and off the field. The best way to describe the experience is if Telltale Games made a sports title it would be EA’s Longshot. There isn’t much on field action, but more of a focus on the story. The only knock I have against this intriguing game mode is that no matter how well you do with the challenges you are always the underdog. Getting a high draft grade as a QB usually means you’ll be selected before the 7th round in the NFL draft, but that is not the case in Long Shot. You start from the bottom and work your way to the top. After completing your journey to the NFL you can even jump in MUT as Devin Wade or his WR sidekick, Colt Cruise.

Commentary has always been an issue in Madden and this year proves to be no different. After a few hours of gameplay you’ll hear the same catch phrases over and over and over, making the commentators voices worse than nails on a chalk board. They are wonderfully authentic and hopefully as the commentary patches come out through the year it will make you want to turn the sound back on. EA has always done an amazing job choosing their soundtrack by using a variety of high energy tunes to keep the adrenaline pumping. This year’s soundtrack boasts cuts from Kendrick Lamar, Action Bronson, Snoop Dogg, Steve Aoki, Imagine Dragons and many, many more. Sure there will be songs you don’t like, but EA does a great job of mixing things up. 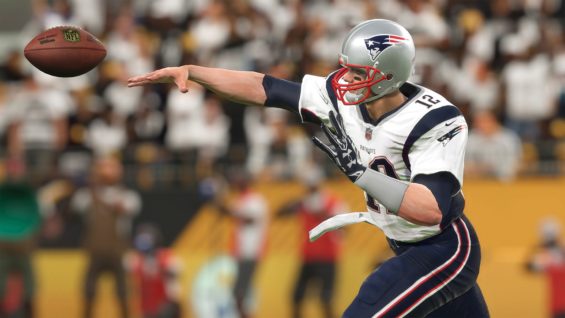 While it may not seem like a lot has changed in the course of 12 months to warrant you forking out some cash for an updated roster, EA has done a great job of streamlining gameplay mechanics and wrapping the entire package up in a new game engine. The addition of some game modes like Play Now Live, Long Shot, and tweaks to MUT give the game plenty of longevity to keep the avid football fan entangled in a variety of activities until next year’s release. Sure there are some minor glitches here and there, as well as dealing with online players who cheese the hell out of certain exploit plays, but you’d be hard pressed to find a flawless game this day and age. Madden 18 may not be groundbreaking, but it keeps the franchise in good form to continue to move forward. Don’t pass this year up if you were on the fence because there aren’t many sports titles which deliver a pure authentic feel that will keep you coming back for more.